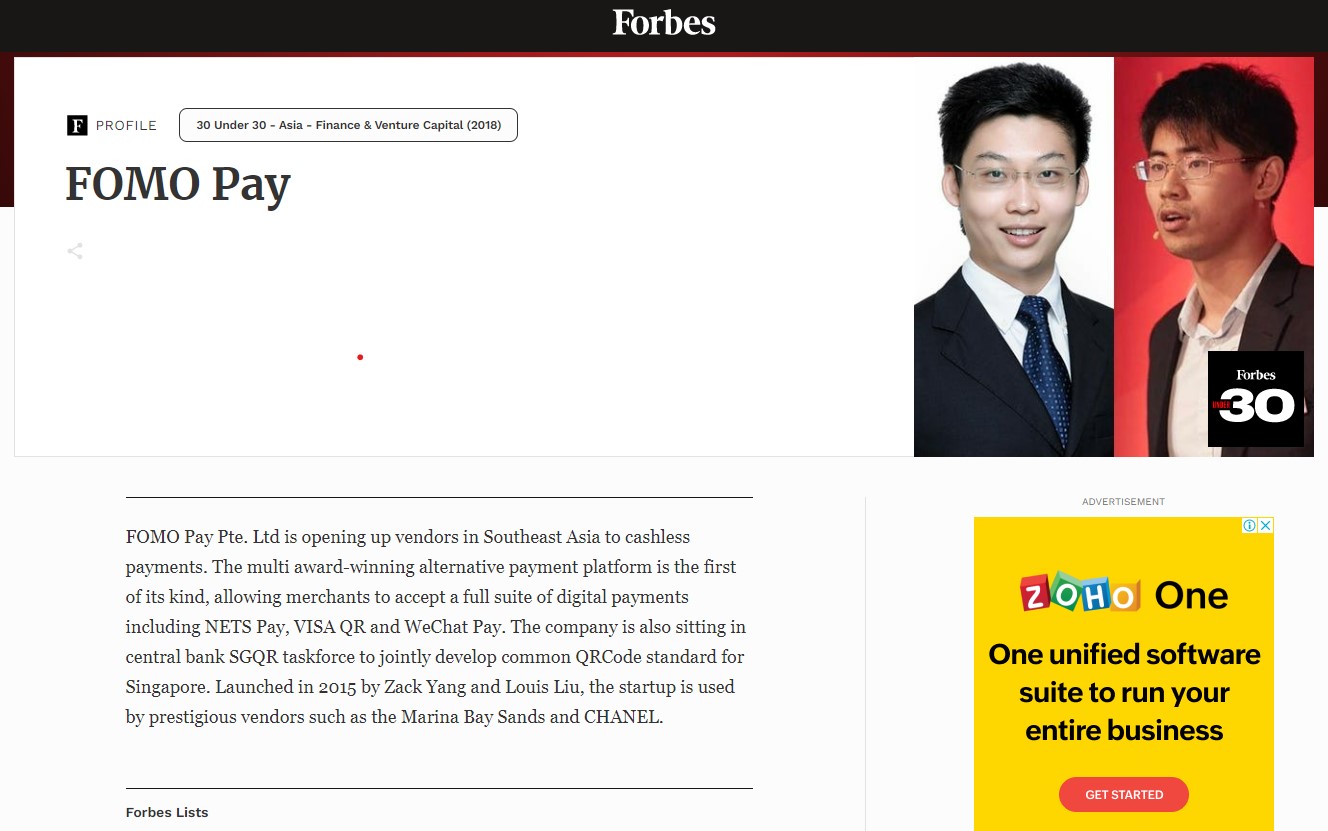 We are proud to announce that our co-founders, Louis Liu and Zack Yang, have made it to Forbes’ 30 Under 30 Asia list this year. The list features 300 young innovators and disruptors under the age of 30 who are driving change in their industries. The finalists were selected from 24 countries across Asia-Pacific, amongst thousands of online nominations researched by Forbes’ team of reporters and accomplished judges.

Louis Liu and Zack Yang, co-founders of mobile payment startup, FOMO Pay, was listed under the Finance & Venture Capital category for their influence on money flows in Asia’s economy. While there are many mobile payment options available in the market, Louis and Zack found that many merchants face difficulties in assessing which payment option to accept and having to deal with multiple terminal set-ups or displaying multiple QR codes for customers to scan. As such, FOMO Pay combines a variety of payment options into a one-stop payment service to help businesses embrace digital payments easily.

Launched in 2015, FOMO Pay has played a role in introducing vendors in Southeast Asia to a full suite of cashless payment modes, such as NETSPay, WeChat Pay, Alipay, Grab Pay, Baidu Wallet, and many more. Existing vendors that adopt FOMO Pay include reputable brands such as the Marina Bay Sands, CHANEL, SPH, and StarHub.

Currently, the company is sitting as a member of the MAS SGQR taskforce to develop a common SGQR standard for Singapore. The SGQR is a national QR code that aims to unify the existing fragmented e-payment market, so that it will work with all the e-wallets in Singapore. TThis is aligned to FOMO Pay’s goal of providing a one-stop QR code payment solution for merchants to accept a full suite of e-payment solutions. FOMO Pay allows merchants to adopt cashless payment solutions without having to worry about infrastructure set up costs and the different fees involved. Due to the low cost nature of the QR code payment solution, there is also a huge growth potential with its increasing popularity amongst merchants.